This afternoon it is being reported that a deal has been struck over Homs City, allowing 2,250 people, mostly rebels, to evacuate. The text of the deal specifies that “the evacuees will be escorted by UN and Iranian embassy representatives, as ‘guarantors’ of their safety,” includes provision for “the exchange of an unknown number of Iranian and Lebanese prisoners currently held by the Islamic Front,” and will allow aid into Nubl and Zahra, the two besieged Alawi/Shi’a pro-regime towns in Aleppo Province. The regime’s preparedness to trade valuable prisoners again for foreign Shi’ite jihadists who have been captured by the rebellion because its masters in Tehran have ordered it to is not likely to endear it to the fanatical, terrified Alawites it has thrown into the way of this rebellion; hundreds of Alawis are still missing after a push by Salafi and jihadist insurgents (many of them foreign) into Latakia last summer, and there is tremendous rage in the Alawi community that Bashar al-Assad has done nothing to recover these prisoners. This comes after reports late in the evening of May 2, on social media, that Homs City was about to fall to the regime. A “ceasefire“—as regime-imposed settlements on areas starved into submission tend to be called—had been struck earlier that day, and the rebellion was to evacuate. 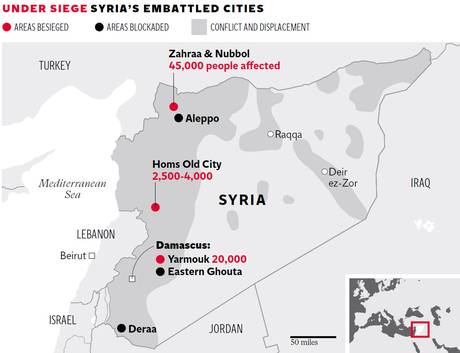 The regime is using starvation-sieges across the country, in Damascus and Homs most obviously, but ISIS and similar groups—which do not deserve to be called “rebels”: they’re not even Syrians and spend as much time fighting the rebellion as the regime—have surrounded two pro-regime towns in Aleppo shown here. 220,000 people are under terror-sieges in Syria: 175,000 by the regime, 45,000 by the takfiris.

This follows the utter circus of a process to get food into a city besieged for 26 months, since Baba Amro was shelled to ruin in February 2012, and utterly cut off by June 2012. This process was initiated—as it would have to be to be so farcical—under the auspices of the United Nations in February but broke down when the National Defence Forces (NDF, see below) fired on those trying to deliver aid and evacuate refugees. The regime however never wanted negotiation: Homs City will be another victory for the regime’s terror-famines.

The devastation in Baba Amro after the month of shelling in February 2012. Once the regime was sure there was no international penalty to pay for indiscriminate shelling it adopted the tactic more widely.

The regime’s attack on the remnants of the “capital of the revolution” has been underway since sometime in early April, taking as its trigger the murder of Father Frans van der Lugt on April 7, done to death by mukhabarat agents posing as rebels. On April 1, SANA said 233 rebels from Homs Province had their “files settled”: they had been interrogated, disarmed, and had given assurances that they would cease armed resistance. Twenty-three more releases were reported a week later. On April 18, SANA claimed that a further 42 former fighters from Homs had been freed after the aforementioned process.

On April 16, the Washington Post reported the desperate scenes of a final stand being made by the rebellion. The biggest group in the city and the surrounding rural areas in Homs is Liwa al-Haq, a Salafist-type unit that is officially pledged to the Islamic Front—though it is one of the smaller groups in that alliance and that alliance is itself breaking down—but they are totally outmatched by the regime. The WaPo report said that anything up to 1,000 rebels had surrendered to the regime between mid-March and mid-April, with 500 the minimum, and those who were still fighting were “preparing themselves with suicide belts” that “they will use … as a last resort”. The next day it was reported that an all-out attack on Homs City was underway with “artillery, tanks, air power and infantry“: accusing the rebellion of shelling Alawi neighbourhoods indiscriminately, the most intense fighting for several months in Homs was taking place, with the regime battling street-to-street to reconquer the area. Agreeing with the WaPo report—evidently the same oppositionist sources—it was said there were 1,000 people, fighters and civilians, remaining in the rebel-held sections of Homs City. On April 22, the AP reported on the total desperation of the rebellion: its more fanatical elements hurling their bodies against the siege in suicide-attacks, others falling back into the desert, the civilians trapped in the middle as the regime pounded the area with relentless shell-fire and air strikes. “We expect Homs to fall,” said an activist. “In the next few days, it could be under the regime’s control.” Well Homs held out longer than that—even with the temptations offered the rebellion by the regime of food and being able to return to their families, which “really did weaken hundreds of them”.

BBC map from March 2012. By this point, the Old City and Khalidiya are the main hold-outs for the rebellion (both, incidentally, subjected to the first chemical weapons attack in December 2012).

The key point about Homs City has been made best by Aron Lund: Homs City is strategically vital to Assad and the Iranian controllers of his security sector in a way that it is not to the rebellion.

Homs is Syria’s most important transport hub, controlling not only the north-south highway between Damascus and Aleppo and the road linking the capital and the coast but also several pipelines and parts of the electric power infrastructure. Retaking the Old City would free up forces for operations in other areas, mopping up smaller rebel concentrations around Homs and consolidating regime gains. Targets would then most likely include Waer to the west as well as the northern Houla-Rastan-Talbiseh rebel enclave.

When the final collapse of the resistance in Homs City comes, it will give the regime momentum, it will have vindicated (again) the terror-siege tactic that has starved innumerable enclaves to their knees, and it could free-up troops for the impending battle in Aleppo City and the ongoing struggles the regime is having in Deir Ezzor where it is hanging on in seeming defiance of the laws of gravity to sections of that city. That last part seems unlikely however: this theory has never yet worked.

Last autumn, the regime was in as good a position as it has been for a long time: it has achieved that massively-symbolic victory in Qusayr, Hizballah had openly announced its presence, and the regime’s allies in Moscow had completely outwitted the United States and not only prevented punishing air strikes for the massive chemical weapons attack in Ghouta, but had secured from the West relegitimisation; Bashar was now a partner in the removal of chemical weapons. His forces were sent to savage Qalamoun north of Damascus and as-Safira in Aleppo—a necessity to comply with getting rid of the chemical weapons, didn’t you know; there were sites that needed securing—and for the first time in a long time the regime was fighting on multiple and geographically widespread fronts. But even the victory in Safira was its own form of weakness:

The amount of combat power the regime requires to secure and retain territory, such as as-Safira, is so high that it is not able to do so quickly and efficiently, and retaining terrain is its greatest challenge.

It took until mid-March this year for the regime to reconquer all of Qalamoun. This suffered the same problems as all previous supposed tide-turning victories. In Qusayr, it was said that now the regime will drive into Aleppo City, but no sooner had it pacified Qusayr than the surrounding areas erupted in rebellion. Having pacified them, there was then a totally unexpected push into the regime’s own heartland on the Sahel (Coast) Front. The simple fact is that even with imported Iranian elite killing units like the Hizballah and more dispensable manpower in the (mostly Iraqi) Shi’ite jihadist legions that have flocked to Bashar’s defence, the regime cannot even secure the key zones of the west of the country—Damascus, Homs, Latakia, Tartus, and Aleppo—that it would have to control if anything approaching victory was to be achieved.

This is not to downplay the impact of the Iranian theocracy and its foreign tributaries: Without them, the regime would have collapsed long before now. By November 2012, with a raging insurgency of more than 50,000 men, the regime had at most 38,000 usable troops. The NDF, put together under Iranian direction at about that time, put another 100,000 men at the regime’s disposal by the summer of 2013, and folded in all the paramilitary organisations—the loosely-defined Shabiha and the Popular Committees—regularising and professionalising them into a counter-insurgency force, even if one that undertook the “Petraeus Doctrine as understood by the Khmer Rouge.” Still, the regime has given up on controlling all of the country, and without a massive infusion of foreign manpower it cannot win.

The kill-rates tell of a regime that is losing the war of attrition. The regime has successfully radicalised the insurgency to fulfill its propaganda of a Wahhabist uprising in order to dim international support and the Obama administration has refused to use any of the instruments available to it to make a difference, but demographics are remorseless: the regime cannot hold off the Sunni wave forever.

5 thoughts on “The Coming Fall of Homs”